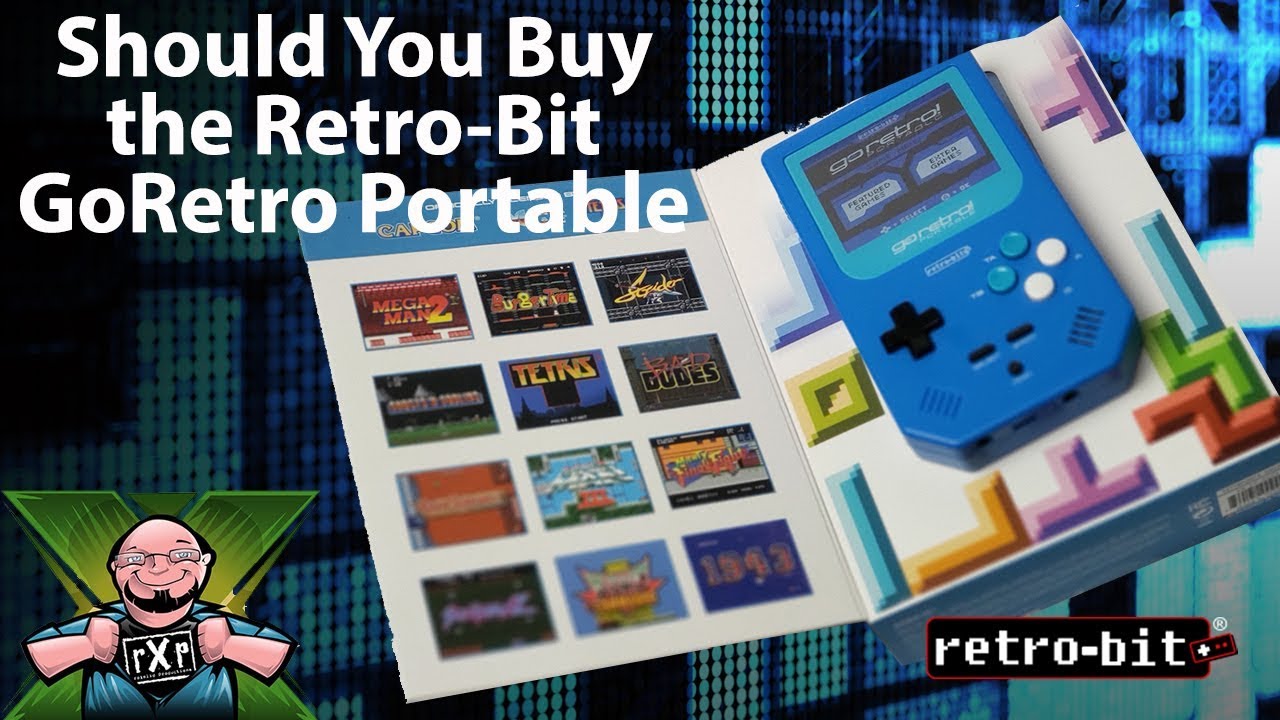 In this video, we unbox and test out the Retro-Bit GoRetro portable handheld gaming device.

The GoRetro Portable comes pre-loaded with 260 games in it, 37 what they call Premier titles and then the rest are just additional titles. Let’s be honest, while the additional titles will be neat and you’ll probably want to check out here and there it is really all about those 37 Premier titles. And those are some darn good titles.

The unit itself, well it’s is inspired by the original Gameboy, it has its own design aesthetics. It does not feature cartridge slot, all the games are loaded onto the system itself and there is no way to add additional games. Instead of the GameBoy’s two buttons, the GoRetro Portable has four, and A and B button and a turbo A and turbo B button. The GoRetro Portable even features a full-color 2.8-inch display. Additional ports and connectors included a 3.5-millimeter headphone jack, and AV output Jack, more on this later, and a USB port for external power. The handheld is powered by for Triple-A batteries, which while small and light, will not have quite the capacity of a AA.

I pretty much stuck to the premium games and I have to tell you they play pretty well. There was some slowdown in games like MegaMan 2, but the original game has that too. I wish they would have fixed that in emulation but I guess they were going for the most realistic experience, who knows? Visibility on the color displays very well. I was sitting off to the side and trying to keep the screen centered in front of the camera for capture, and I was still able to see most things.

I did attempt to connect the unit to my television using the AV output port and a 3.5 mm AV to RCA jack cable that I have. Nothing that I owned would play it, none of my TV’s, it would not work with my Retro Tink, it would not work with my OSSC. I don’t know what to do, but I will check with Retro-Bit to see if there is a specific cable that they recommend. I really would have loved to have captured footage off of this so that you could get a really clean look at the video.

Why it RoX:
– It’s ONLY $35!
– Great, retro-inspired design
– The 2.8″ display is quite good
– The 37 premier games are darn good
– Turbo A/B buttons
– Good D-Pad
– Convenient reset button to get back to the main menu
– Split table of contents makes it easier to get to what you want to play
– Officially licensed Tetris, Data-East and Capcom titles
– Can be powered via USB for in the car

What should be improved:
– No cartridge slot or way to add games
– AAA’s instead of AA’s or rechargeables
– No screen adjustment for brightness/contrast/color
– I could not get the AV output to work on anything
– Some lag during some gameplay
– Plastics are a bit cheap and glossy feeling

Should you buy one?
I have to say I had a lot of fun playing the Retro-Bit GoRetro Portable. It really reminded me of a handheld Super Retrocade, also from Retro-Bit, and that’s a good thing. I was really impressed with the display. The colors were great, the sound was pretty spot-on, and the games were fun! And at the end of the day that’s the biggest thing is if you have fun, and I definitely did. I know there will be some out there that will dismiss this because of the lack of ability to add extra games or because of the extra games that they don’t see any value in. And I will be honest, I’ve still yet to play any of the additional games. But the number and quality of the Premier titles, in my opinion, definitely makes the Retro-Bit GoRetro Portable something worth considering.

The footage used in this review are used under the Fair Use laws, referenced below:

Notwithstanding the provisions of sections 106 and 106A, the fair use of a copyrighted work, including such use by reproduction in copies or phonorecords or by any other means specified by that section, for purposes such as criticism, comment, news reporting, teaching (including multiple copies for classroom use), scholarship, or research, is not an infringement of copyright. In determining whether the use made of a work in any particular case is a fair use the factors to be considered shall include—